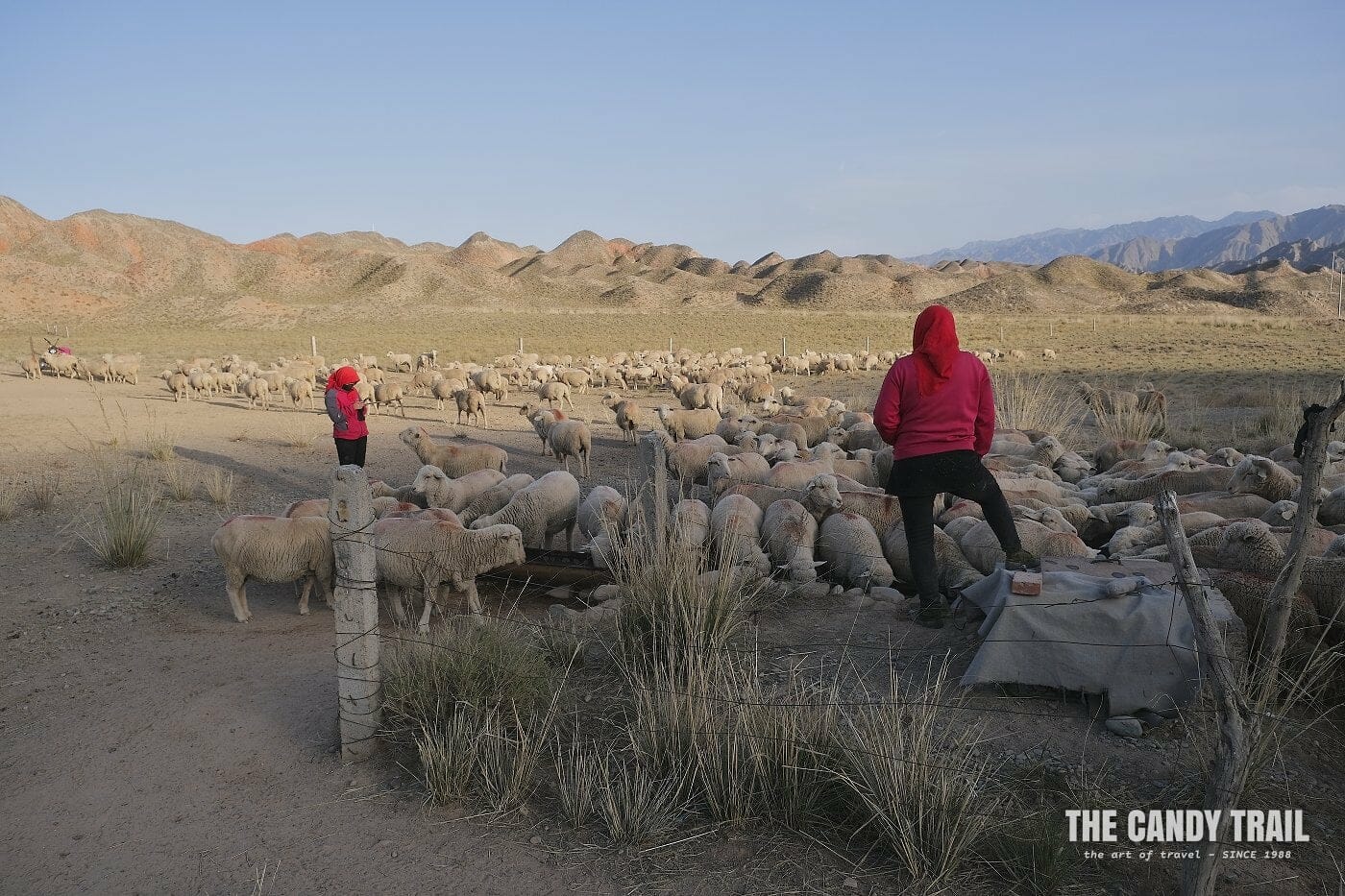 Into a desert mountain canyon we drive. But the ravine’s so narrow, that we wonder where we’re going to camp.

After a couple of hours, we get lucky and turn onto a gravel road, and a gentle valley surrounded by red-earth ridges emerges. Now, this looks like the place to stay!

Watch Video of the land of the Yugur Nomads

It’s the Chinese National day holiday week, so we want to be anywhere away from the crowds.

And it’s my 54th birthday, the following day.

Tranquil, spectacular scenery, and good food and drink are my requirements.

The arid landscape is empty, the road quiet. We find a watering area, just off-road, and decide this is it for the next couple of days.

Little did we realize, that each afternoon flocks of sheep would emerge from the hills, running to the water pump. Often, the troughs were dry, until a shepherd arrived to start the pump.

And then the sheep rushed the flowing water – as any thirsty creature would.

Each day, Wei chatted to the Yugur shepherd women. Sometimes they all gathered around to check-out the van – and the foreigner.

They said that this spot was one of 3 seasonal pastures. We were parked at the Autumn grazing area. Another region was Spring and Summer, another for Winter.

When I said that their sheep acted like goats – scrambling up steep slopes; they laughed. Seemed they had to adapt to find food.

Incidentally, they’ve not allowed to herd goats as their hooves really rip-up and damage the land.

According to Wei and the conversations, these Yugur women – outside of their occupation, were the same as any modern Chinese women, and this was so-true judging by their glamorous social media updates (on Wechat).

Furthermore, many of the Yugur shepherds herd their flocks by motorbike. And off course, they were all glued to their mobile phones when the sheep were behaving themselves.

Yeah, like other rural and nomadic folk across the world in the 21st century, their traditional way of life is in decline and many have settled in towns.

When we’re camped-out in the countryside and we encounter locals, they often say that we’re living a simple life, just like them.

And in this case, we too, are nomads.

Traditionally, they’ve been known as the Yellow Uyghurs, but detailed factual accounts are slim.

Historically, there were two groups of Yugur people – the Mongolian-speaking and the Turkic-speaking, and now, they mostly live in the Sunan Yugur Autonomous county of Gansu.

And the nomads we met, I assume, were of Turkic origins because a woman said only in recent times have partners from outside their group been allowed. Now marrying Han Chinese, Tibetan, whoever, is okay; except, that intermarrying with Mongolians is still forbidden.

Now, I don’t know this reason but I’m guessing it stems from past grievances. As once, the Yugurs lived in Mongolia, but in 840 AD they had to flee after the destruction of their Uyghur Khaganate.

From Mongolia they relocated south, settling at the base of the Qilian Mountains, where they established the Ganzhou Uyghur Kingdom (870-1036).

However it didn’t last, and defeat in an 8-year war saw Yugur lands annexed by Western Xia in 1097.

And in the following centuries, the Yugur people eventually joined the Qing Empire (in an era that shaped the borders of contemporary China).

Lalibela – My Pilgrimage to the Ancient Rock Churches of Ethiopia
Onsite cookies enhance your experience.