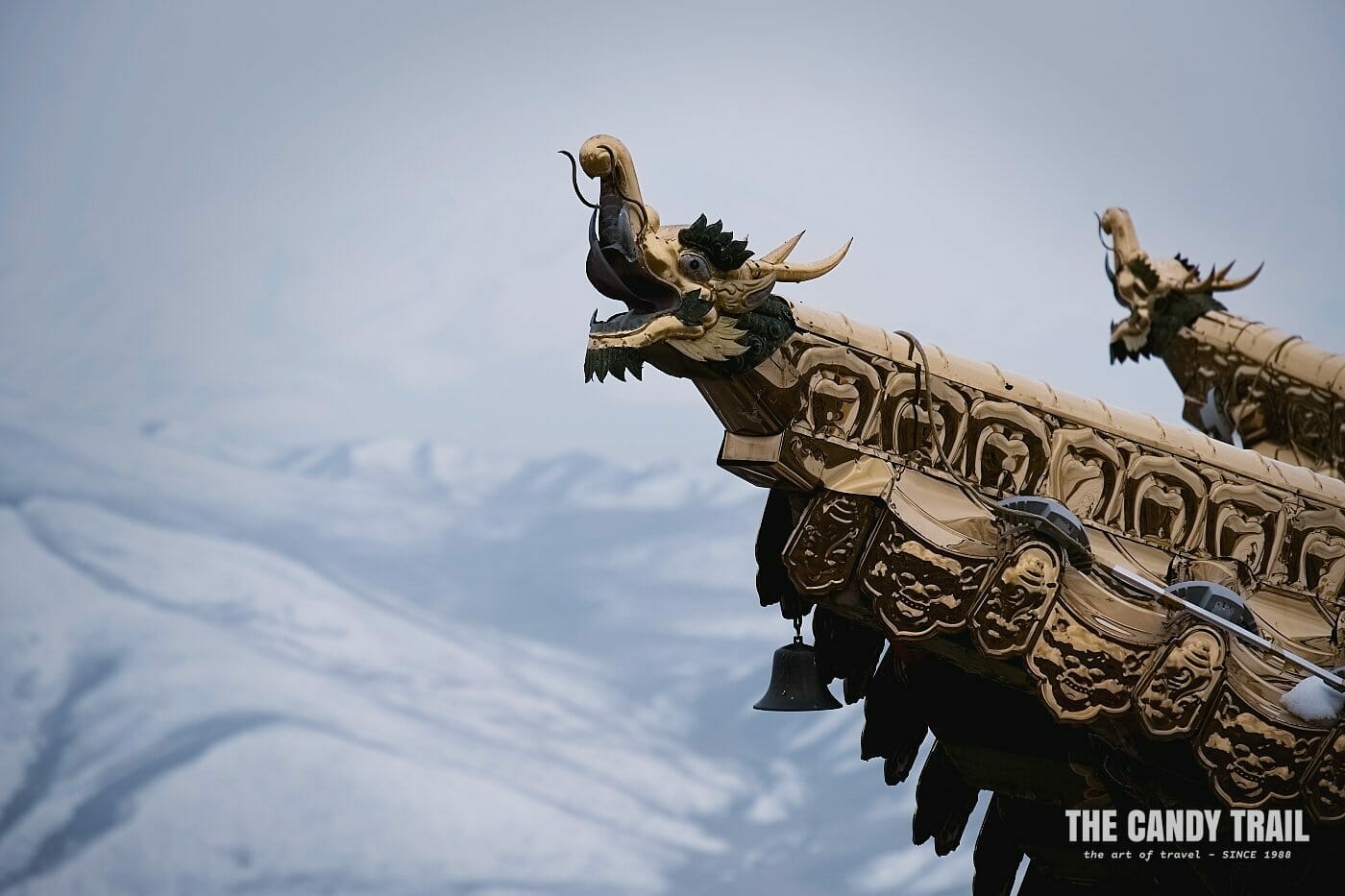 An ancient city lured us – but the isolation seized us. So after van-camping at mud wall ruins, we drove the next morning towards the horizon of ragged cliffs.

That second day, we halted in a Tibetan monastery village.

And later on another hillside, we met a friendly monk at the temple of the Living Goddess, who showed us around – however, no photos allowed.

When I asked of the Goddesses’ whereabouts – via Wei in Mandarin – he replied she’d died 9 years ago but that her reincarnation was due to appear next year.

At the lower monastery, a baby goat besotted with Wei kept running after her and bleating.(*1) Meantime, the other goats watched, and wondered what the fuss was about.

On another hillside, vultures gathered around the carcass of a baby yak; fighting and prancing around the feast.

That second afternoon and evening, we spent in a river valley in a grassland of long-horned sheep, overshadowed by those humps of the ragged horizon – now hiding a sacred cave (which, we’d explore tomorrow).

Hell, not what we expected. Sacred cave or not, it was a mission into an abyss known as the Baishiya Karst Cave ( 白石崖溶洞 ).

But it’s also home to the earliest hominin fossil ever found on the Tibetan Plateau, (found by a monk in 1982) proving that humanity arrived in this high-altitude, low-oxygen environment around 160,000 years ago.

Today, the cave remains a place of meditation for monks and Tibetan reverence and according to legend, Baishiya Cave is more than 50 km long – reaching to Qinghai Province.

Anyway, ancient and sacred or not, I didn’t go in much deeper than 100 meters – pictures above – before it descended into tiny darkness (not wanting to trash my hand-held DSLR camera – no bag with me; I wasn’t prepared. Didn’t even have my head lamp. Duh! ?).

Wei went further. Holding her iphone as a torch and stuffing my action camera into her jacket, she accompanied a Tibetan family, baby tied and shrieking on mother’s back, they went deeper.

And I could still hear the baby crying …

Street Guy Gets a Meal – Doing a Good Deed in Cambodia

They came out 30-40 minutes later, exasperated, all with muddy shoes and trousers. The elderly Tibetan chief lay gasping and mad, nearly-dead – like having a heart-attack as two young male members of family consoled him .

Wei said, it wasn’t worth it, in spite of a monk explaining what this or that rock formation – may have – resembled. (*2)

(*1) – Documented on a video she posted on Chinese social media. (The goat had colored ribbons tied to it; apparently it was gifted from a villager to the monastery. Now, it was to be untouched – not eaten, be allowed to life a long and happy life.)