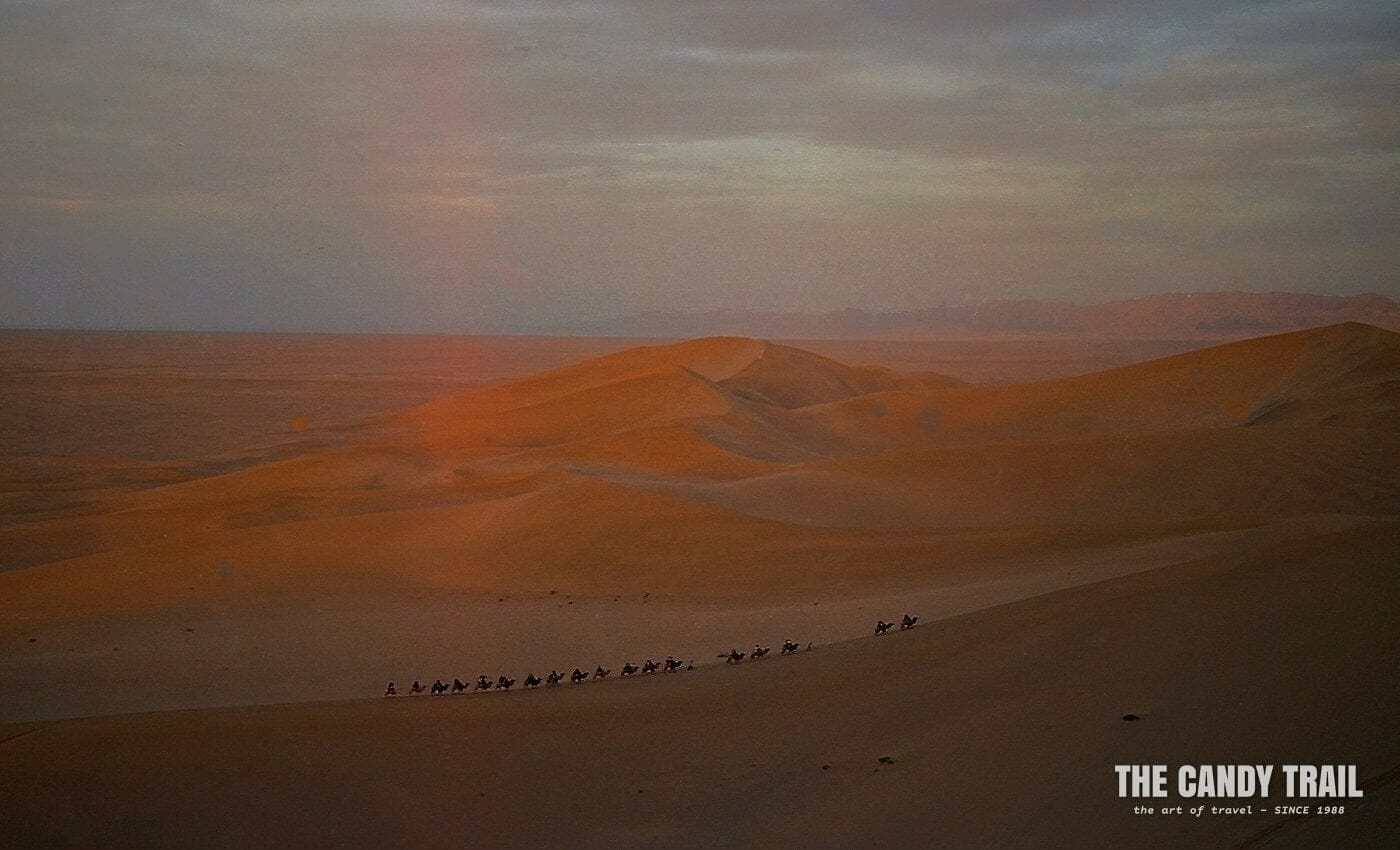 The Silk Road – An Arduous Journey Across China

Twenty-eight hours on a slow train across the Gobi Desert provides me with plenty of time to reflect on the rigors of traveling the Silk Road.

It’s a brutal world beyond my window.

The sun glaring over endless mountains and empty expanses of stone, sand and scrub. Across this wasteland flash occasional blurs as lines of power poles or other trains pass.

Too rarely, we halt at isolated, shabby stations – where vendors rush to hawk their wares before we slide away.

On the 801 from Lanzhou to Jiayuguan the services are basic.

Compartments sleep six passengers, each with a hard, fold-down bed, without pillows, sheets or privacy. No door shelters us from the noise of the corridor but at the end of the carriage is a supply of boiling water – to brew tea or make instant noodles.

When an attendant pushes past with a trolley of cola and beer bottles, packets of peanuts and assorted snacks, I decide, I’ve got it easy.

Dangers on the Silk Road

Problems encountered on the Silk Road trade route today are mainly confined to the effort required in purchasing a ticket without much knowledge of Chinese.

Or threats to your camera from overzealous police.

Or a rail journey that’s meant to take 18 hours but stretches into 28, as in my experience.

Yet nothing compares to the myriad of dangers faced by those on the Silk Road some centuries ago.

Back then you slogged for months by camel, braving high temperatures and sandstorms; and in the mountain passes, altitude sickness and snow-blindness. But surely the most feared threat was robbery and death at the hands of bandits.

When I was in Lanzhou, a bland industrial city of 2 million, I’d witnessed a modern-day Silk-Road robbery.

Amid street congestion a thief had snatched a box off the back of a cycle-cart, without the owner seeing. But a by-passer had. He chased the thief a few meters – until he’d dropped the carton. The good Samaritan then returned the goods to the bewildered owner as the thief calmly strolled away.

Back in the old days merchants had combined their caravans to protect themselves, grouping as many as a thousand camels together under armed escort.

Despite all the dangers of the journey, profits ensured that the Silk Road flourished between the 2nd and 14th centuries (until it was superseded by sea freight).

Previous cargoes of silk, ceramics, paper, and later gunpowder, once left the ancient capital of China, Xian, to arrive in Central Asia and India, other routes led into Iran and Arabia and onto the Mediterranean.

Goods trekked in from the West had included grapes, cotton, spices, wine and glass.

Yet it was only during the last century that a German geographer coined the name “Silk Road” to describe this chain of trade routes.

The romance of the Silk Road trade route doesn’t really strike me until I arrive in Jiayuguan.

It begins with the atmosphere and flavors of the evening market. The roasting of meat, the lights of lanterns and Islamic music invites me over as Muslim traders grill kebabs over charcoal, as customers sit at tables consuming and chatting.

Historically, Jiayuguan was the westernmost post of ancient China and subsequently it became a crossroad of cultures.

Today Jiayuguan is located in the north-west province of Gansu (China’s silk-corridor state, wedged between the deserts of Mongolia and the high peaks of the Tibetan Plateau). Just beyond the modern city is one of those alluring Silk Road sights.

The tranquility. The desolation.

Between snow-capped mountains and rugged, black peaks lies a narrow desert strip guarded by the battlements and pagoda-towers of a mighty, 14th-century Ming fortress.

Here is also where the Great Wall ends – after snaking across China for 6000 km it halts at this strategic fort, appropriately named the ‘The Impregnable Pass Under Heaven’.

Through these gate-towers all caravans traveling the Silk Road had once passed.

Beyond the western gate sweeps the Taklamakan Desert – to ancient traders a terrifying, waterless wasteland, haunted by barbarian nomads and evil spirits.

Those merchants who survived the arduous journey gave thanks in the form of commissioning cave-shrines to be built along the route.

The most famous are the Thousand Buddha Caves, near the oasis of Dunhuang.

The visions of a wandering monk – who saw a thousand Buddhas, it’s said – was so inspired that he cut the very first cave into the Mingsha cliffs in 366 AD, (Buddhism dominated China during the Silk Route’s golden age).

I only get to see ten caves for my $10 entrance fee.

The largest cave houses a 31-meter-high Buddha, its feet the size of a small car.

In the desert around Dunhuang, there remain fragments of fortified beacon towers that once warned of an enemies’ approach.

The main threat today are swarms of package tourists, mainly domestic Chinese, clambering over the sand dunes, riding camels, posing on mass for photos or paragliding from the peaks. The effect is circus-like.

As the sun slides behind a silhouette of distant dunes the magic of the past returns.

I peer over a high ridge and down to a cluster of tourist camels trailing the slopes in the fading light; imagining them to be a trading caravan traveling the Silk Road, and that I’m a bandit, watching, waiting, planning to attack and plunder.

[ This article was originally published in 1996 + 1998 and is one of a series that I wrote in the 1990s, but later decided to stop writing for the mainstream media. See more of these articles here. ]