Cemetery of Ships – The Aral Sea Disaster in Uzbekistan

When it comes to man-made fu*k-ups – it’s difficult to top the Aral Sea disaster.

And to rub that fact in your face: the cemetery of stranded ships at Moynaq, once a fishing port, is now located 170 km from the actual shores of the Aral Sea!

The Aral Sea’s problems began in the 1940s when the Soviet Union decided to grow cotton in the deserts.

The project was successful.

Cotton was grown in huge amounts and Uzbekistan (then part of the USSR) was a major exporter, for a time.

But the irrigation canals had diverted water from two major rivers and in doing so, they sapped the replenishing waters of the Aral Sea.

Since the 1960s, the world’s 4th largest inland body of water has shrunk to 10% of its original size. And has split into smaller lakes.

The wrecked ships at Moynaq are now 170 km from the shores of the Aral Sea today.

In the Aral Sea that remains, fish stocks are very low (due to increased salinity in water).

This has crushed industry in Moynaq.

And there’s been no fishing, canning or ship-building industries since the 1980s. So thousands of men have left for Russia and other regions to look for work.

A once-mild climate created by the Aral Sea has turned extreme in Moynaq.

The day I visited the Aral Sea – rather, Aral Desert – it was freezing.

To enhance the mood, I drank a bottle of red wine (and later a 1.5 liter of 7% beer) to counter the chill.

There I wandered amazed amid rusty, wrecked ships in bleak sand and scrub.

During the afternoon, a couple of young lads joined me. They saw the ships as an amazing playground.

Later, a local wedding party turned up to pose at the vista point where the coast once was. Some group photos for a few freezing minutes.

They invited me for several vodka toasts, which I accepted.

And from that point, my memory deserted me – evaporating like the empty sea, that I’d come to contemplate. 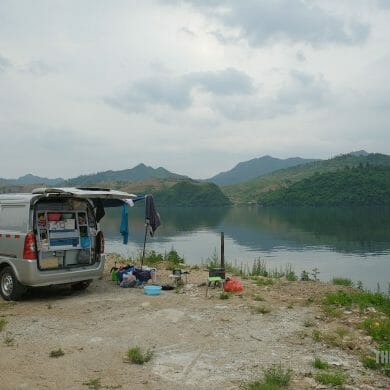