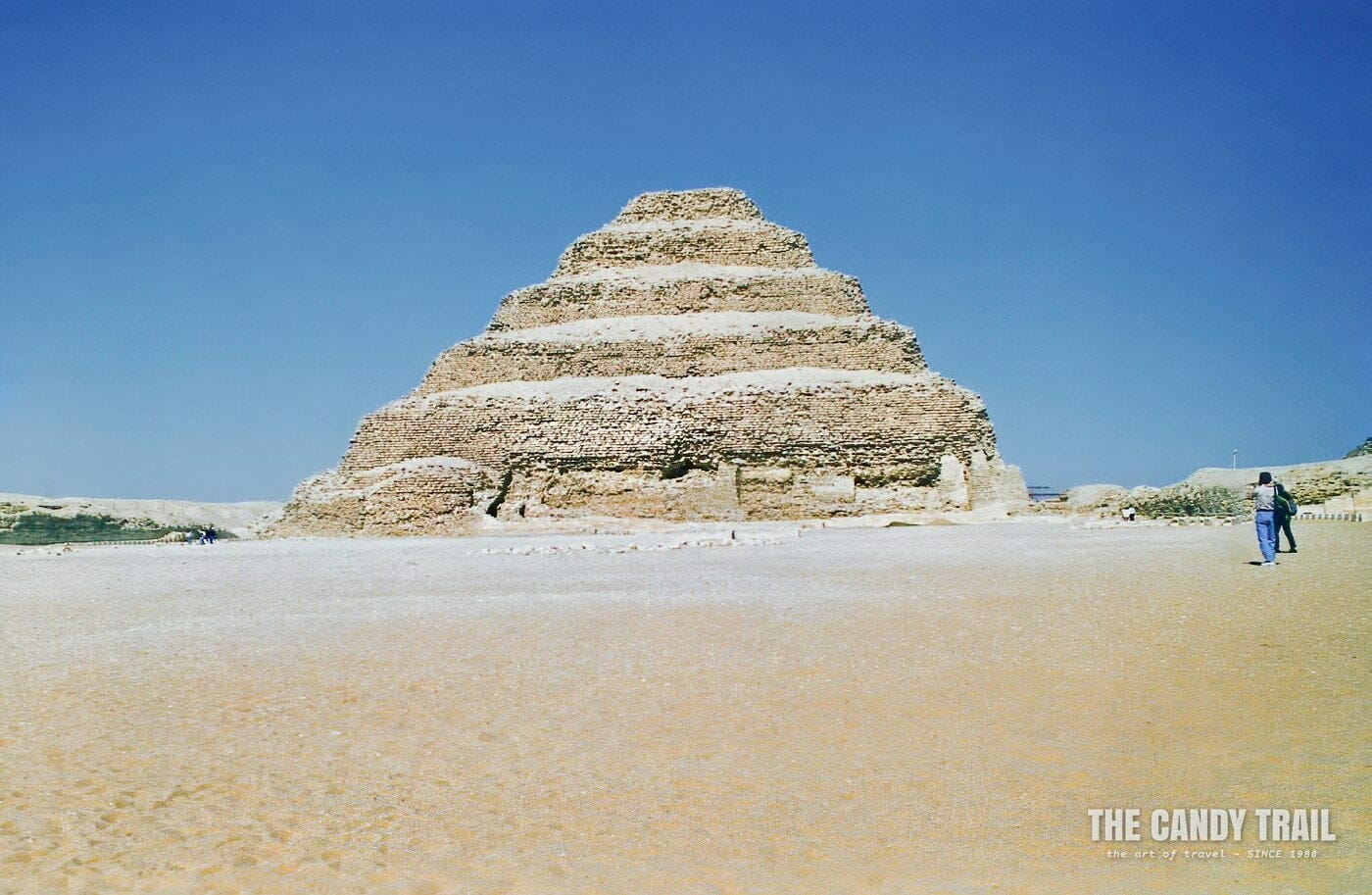 The lack of tourists and the silence is bliss.

I lay on the warm sand, eating a felafel-filled pita-bread, staring over the desert to the Pyramids of Giza (some 20 km away).

And beyond those distant triangles, and from where I bought this take-away lunch, looms the smudgy grey outline of high-rise Cairo.

But here rising in front of me, dominating the sandy plain of Saqqara – Djoser’s mighty step pyramid.

My view and reason to be here is this mass of stone-blocks and a blunt peak stepping into an empty blue sky.

The step-pyramid at Saqqara is Egypt’s first-ever pyramid.

Saqqara is also the oldest stone construction of its size in the world.

Built in 2700 BC, it was constructed about 200-300 years earlier than the bigger, more-famous, pyramids at Giza.

The nearby necropolis at Saqqara served the Old Kingdom Period when Memphis was the capital of Ancient Egypt. From here dead Pharaohs, royal families and sacred animals were taken out in ceremony, to be entombed for their eternal life.

A sign in the sand declares:
GUARDS ARE STRICTLY FORBIDDEN TO GIVE ANY INFORMATION
I showed the guard my ticket
as I entered the tomb.

He nagged me for “baksheech (a tip)”. I said “laa! – No”, and wandered on down the dim subterranean passageways of the Serapeum; yellow, rock-cut walls.

A few minutes passed – before all the lights went out.

And it was then, in the pitch-dark corridor that I could no longer see my hands. Deep under the desert without sound and sight; wandering this ancient tomb alone.

My guidebook had recommended: Take a torch. I had.

But the batteries were weak. Hopeless.

Then the lights returned. The gatekeeper had proved his point.

Obviously he’d extracted cash from some tourists entering after me. I could hear but not see them.

The Serapeum is weird.

Getting to Saqqara Step Pyramid

I caught the Cairo Metro 18 stops south to Helwan, from where I boarded a minibus, then a ferry across the Nile, more minibuses followed by a taxi and I’d made it to Saqqara.

It was grand, yet tranquil.

And with way fewer tourists, and no touts or souvenir stalls, no modern city stabbing at the surrounding sands.

Most of the day the sand dunes, pyramids, tunnels, and the road back to town were mine, alone.

But then, I was surrounded.

It started with one adolescent male.

In 15 minutes thirty school children had joined him. Boys and girls chanting, grabbing my hands, laughing and screeching across this quiet, palm-shaded road.

Suddenly – shit, I saw it happening.

Two boys on a bicycle approaching then smacking into kids … Miraculously, no one was hurt. Not a scratch, not a tear, nor a shriek.

No haunting memories here in Saqqara, in this City of the Dead.