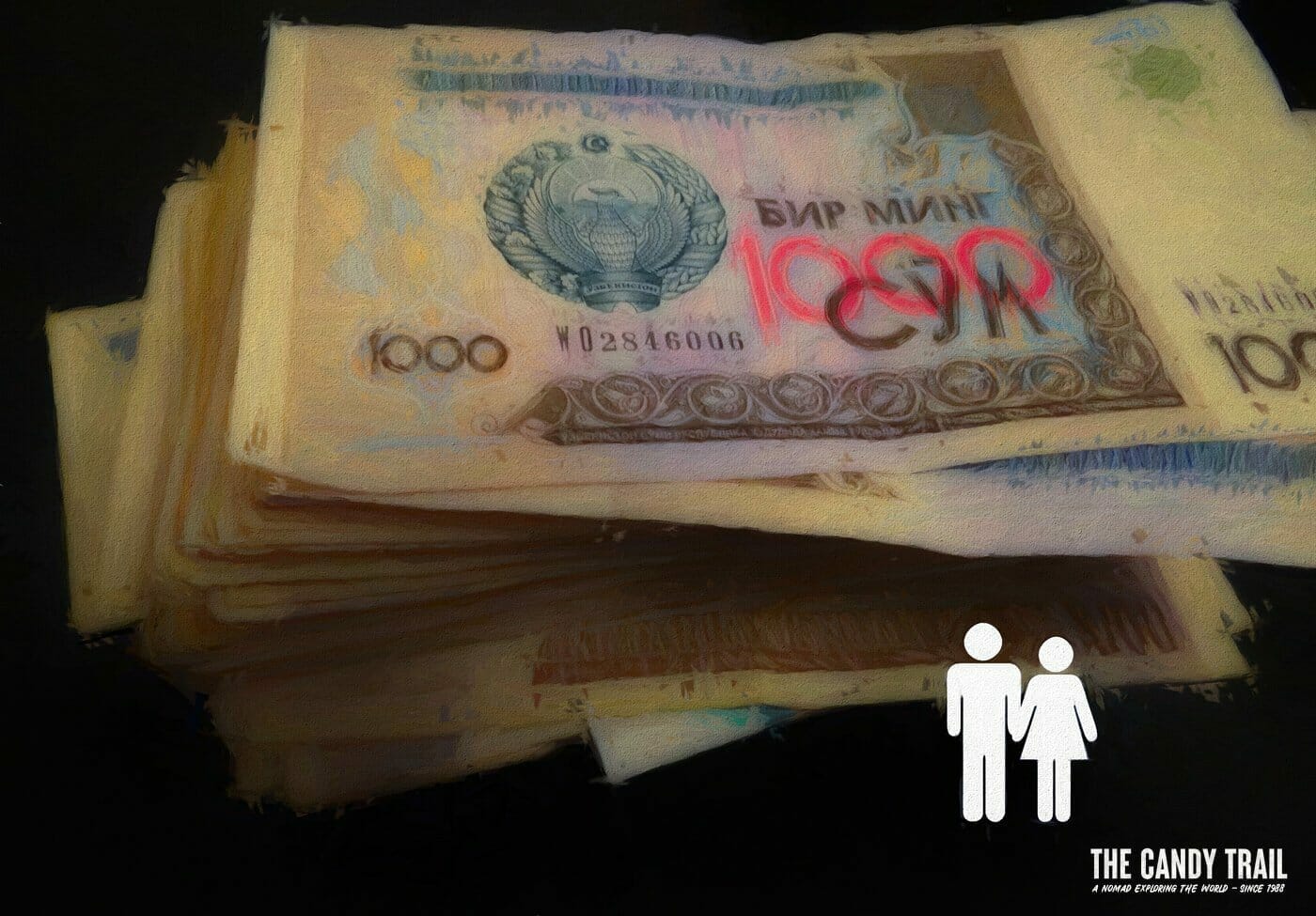 How do I carry my money when traveling the world?

Is changing money on the black-market safe?

Should I carry cash?

What is the best way to travel with money?

Have TWO international ATM cards linked to your bank accounts all accessible by secure Internet Banking.

Use a stealthy money belt and a separate secret cash stash.

Dig into the details below for my money safety travel tips and read some ‘bad’ experiences from traveling the planet for 30 years.

And while much of this money travel advice is sound anywhere – including Western Europe and Australia, it’s particularly aimed at backpacking across the Developing World.

ATMs are out of action or more likely there isn’t one in town, sh*t happens.

So always have cash on hand and plenty of local currency when really getting off the beaten track.

Carry your cash in a mix of US Dollars and Euros*, with an extra stash or two hidden away from your main money-belt.

For regular use, have plenty of small dominations of 1, 5, 10 + 20 notes that are easy to get out. ($US1 are good for motorbike taxi rides between borders and small bribes to soldiers when traveling in bush-taxis in West Africa, typically).

For your main foreign currency, have 50+100 notes, protected from rain, humidity + sweat by wrapping folded bundles within thin-plastic sandwich wrap.

And, make sure every note you have is crisp and clean (or money changers + banks will refuse them).

Cash dollars are essential for most border crossings in Africa

First, you’ll need to exchange cash with a dealer (guy wandering about will find you).

It’s safe – and legal – but the rate will be less than the official rate but that’s fine so you can get enough local currency to pay for onward transport to the nearest town or ATM, where you can get more cash at a better rate.

Back in 2010-11 while crossing Central Asia, I carried – hid up to US $3000 cash on me as I knew ATM withdrawals were impossible in Iran and Turkmenistan, and that I was mostly well off the beaten track in many parts of “The Stans”.

I don’t advise you to do this, and typically I wouldn’t.

But before this, back in 2005, I did get caught out with loads of cash when I was Drugged, Robbed + Abducted in Russia

I’ve used Internet banking for over 20 years while traveling around the world.

Use your own device – with updated anti-virus, firewall and VPN, so you can safely transfer money from a – separate – online account to your ATM-accessible card accounts.

And while you’re transferring funds from your non-ATM-accessible accounts to your card, also check on transactions.

Back in 2001 when I was in East Timor, upon checking my bank account on the Internet, I realized some bastard was purchasing shoes and other stuff with my credit card in New Zealand!

Tell your bank about your travel plans

Do this via Internet banking.

Tell your bank where, when and how long you’re going traveling for and that your credit cards will be used at ATMs.

Because sudden withdrawals or purchases in faraway places is a huge red flag, that’ll see your cards cancelled or paused, until you phone home and jump thru many security questions. Hassle.

AND make sure you have copies of your bank’s Helpline Phone Number on you and in a cloud folder.

Visa is the best ATM card for worldwide travel

Get a VISA credit card – with embedded pin number so you can access money anywhere in the world via their vast global ATM network).

Mostly, the only choice at ATMs overseas is withdrawing cash in the local currency (but some countries also offer a US dollar option, such as Cambodia + Panama).

ATM FEES: Coming from NZ, I have little choice with banking options when overseas.

And for decades, I’d had to pay an ATM withdrawal fee of $NZ 5 for every fu*kin withdrawal – AND I HATED THIS. However, in recent years, my NZ bank has dropped all international ATM fees. Yay!

Yet countries like Thailand + Cambodia will still charge you a withdrawal fee at their ATM transaction point. These mount up, so obviously take out as much as possible in a single transaction.

With my Visa credit card I have an annual low-cost fee of $NZ 20 and a second emergency ATM card, which is a Visa debit card – free of fees and linked to a separate online account.

If you’re an American, you have more options for saving on bank fees – read Nomadic Matt’s advice here.

HOWEVER – a note about global ATMs: A few countries still don’t accept international Visa card ATM transactions. Countries like Iran, Somaliland + Yemen, so research first and prepare to carry all your travel funds in cash (= USD is best).

Carry a second credit card (or debit card) and hide it separately from your passport and primary card.

Also, make sure it’s got a different account number and use this for emergencies only, like if the other card needs to be cancelled because of fraud or loss.

In Senegal in 2007, an ATM ate my primary credit card, and I had to wait over the weekend to retrieve it. Luckily, having that second ATM card gave me the security that if I lost/canceled my main ATM card, I could still continue to travel in West Africa.

Is it safe to change money on the blackmarket?

First, in some countries it’s the only way to get true value for your foreign currency as the state maintains ridiculous – out of touch – currency-controls in banks (Iran, for example).

However, in many countries, it’s also a classic travel scam (like in India or Morocco). Research before you go, as countries change, economies stumble.

Well, most countries won’t have such thing now. But if they do like in Syria, Algeria, Iran + Iraq in the 1990s, then use caution.

Except once in the middle of Algeria, hitching the Sahara in 1991. At random checkpoint, police insisted I empty my money belt and show them receipts for all my currency exchange.

However, I had mostly used the black-market, and when the numbers didn’t add up – they stole the difference!

NEVER exchange money openly in the street – that’s asking to be ripped-off, robbed or arrested.

And it exposes your ‘hidden’ money belt to the world.

If a blackmarket for currency exchange exists, you’ll know about it before you get into the country because you’ll have researched something about your destination, yes?

BEST PRACTICE FOR EXCHANGING ON BLACKMARKET is this: Go in a store or market shop, look around, wait until it’s quiet, and ask the businessman if he can exchange money.

If yes, he will take you into the back or behind a curtain. Simple. Most will say yes, as all the locals do it – if the economy is shot.

Lastly, get an idea of the latest exchange rates.

Travel Money Security – How to carry cash when traveling

But only if they’re hidden, comfortable and not bulky.

They’re best for carrying your passport, cards and cash while in transit – traveling between airports, on buses, trains, taxis, etc, as they are secure against your body and invisible.

But in your daily walkabouts – around town and sights – it’s best not to carry your valuables with you in public as the risk of getting ‘jumped’ in some places will increase.

Rather, leave your money belt and contents locked in your room deep in your locked backpack (this needs to be discrete, and that you trust where you stay. Follow your intuition.)

For daily transactions, I carry a small amount of local currency ($US 10-20) in a plastic bag stuffed into a trouser front pocket.

This is the money I show to the world, openly, when buying street food or beer or whatever. Often locals laugh when they see the foreigner keeps his money in a tatty plastic bag!

Obvious sh*t 101: When going out on the town – partying, most definitely leave your stuff in your room!

And, those big back pockets on your trousers are only good for toilet paper (that pickpockets will clean out).

And even those front pockets are still at risk of pickpockets – I lost a few dollars at a carnival amid crowds in Guatemala. I felt and saw nothing until I went to buy the next beer.

Probably one of the best money safety travel tips I can offer is to always hide stashes of cash in various places for emergencies (around $200 total and also have small $20 bundles on your person 24/7, like in a shoe or backpack seam).

Sometimes ATMs are very public. Literally a shop front exposed to the street. Avoid these!

Of course, best to use an ATM that is in a secure, closed room within a bank and away from prying eyes.

Like once in Cape Town, some guy – not staff – came over to help because the machine wasn’t giving me any money on two attempts. Like he was waiting there for such an event, and was insistent that he could help. Yeah, right! Likely would seize my card and ran.

Walk away and try another bank.

They’re so 19th century (actually, I used them in the early 1990s, before Internet banking and widespread ATMs). But in 2021, are they still even issued? Dunno?

Back in Lahore, Pakistan, in 1990, it was Traveler’s Cheques that saved my journey when a trusted hotel robbed me of 2000 GBP !!!

Luckily, I was reimbursed later, in New Delhi, India.

Airport + luxury hotel exchange booths are to be avoided

I’ve left this one last as it’s so obvious – even to a dead cow.

Really, it’s that ‘travel blogger secret’ by those that claim to be travel experts but can barely lift their suitcases.

Simply, the exchange rates – usually – are worse and they may impose a commission and an extra fee. Go to an ATM.

Failing that, bite the bullet and exchange enough to get you thru the stress of being stuck, and then enjoy a drink or two!

Follow these money safety travel tips – and I assure you, travel will be less stress and worry.