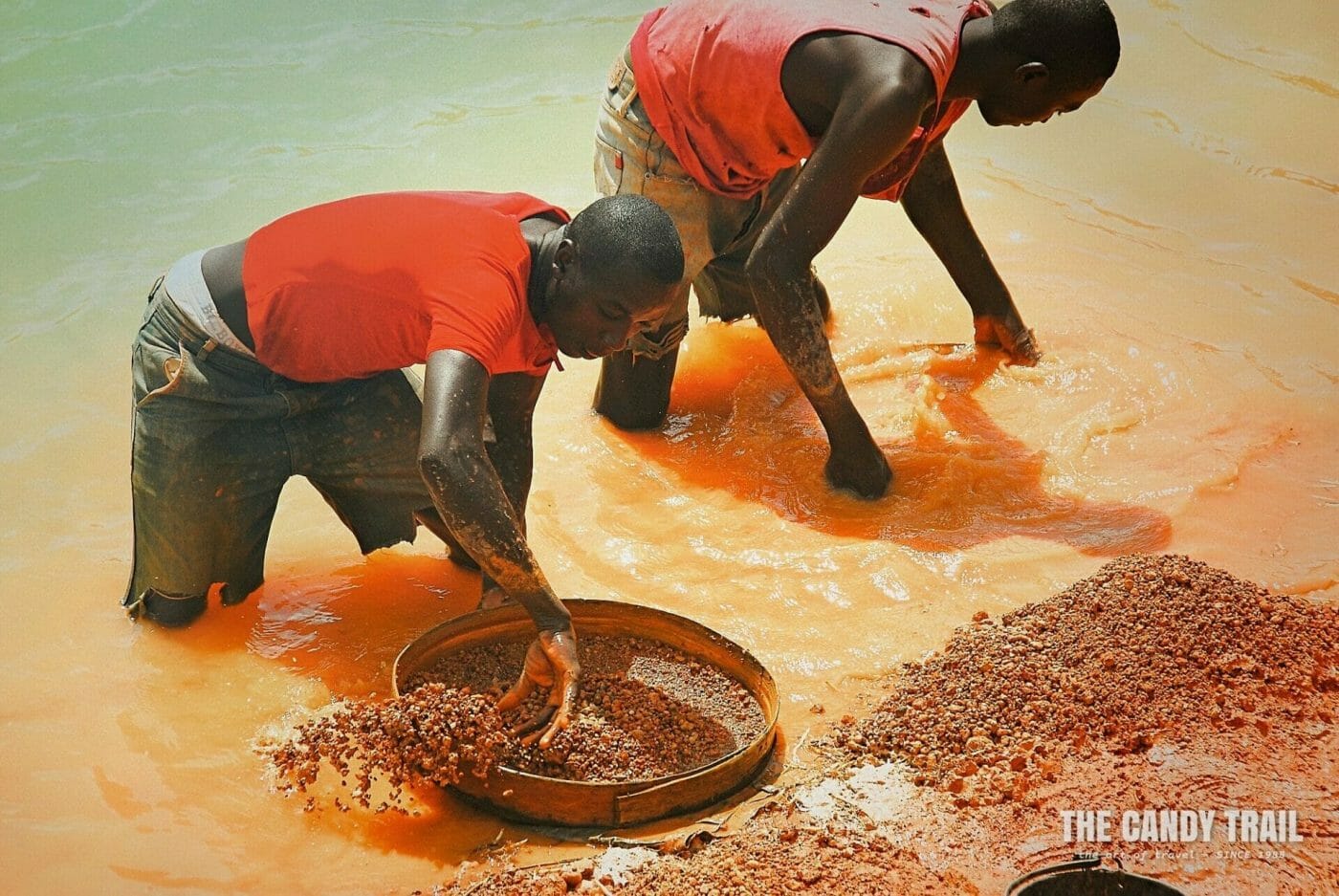 I went in search of diamonds, seeking freedom from this dull, regimented world.

And so, this is how the war in Sierra Leone continued.

A selfish fight for wealth and power between groups of brutal stupid men that trapped the peaceful population, resulting in a decade of cruelty and shit over diamonds.

This is one cause of the crap.

Demand: these dumb stones adored by female fashion across history and prized by males buying them to win a woman.

And in the UK, a Damian Hurst art-piece: a totally diamond–encrusted skull that is cool but an unnecessary derivative of Aztec-art.

Thankfully, they auctioned it for charity—otherwise 50 million bucks is another God-like stupid extravagance the world can do without.

I really don’t care for diamonds or gems or precious metals but can understand their allure—sure, they are pretty.

Only 5 years ago, this was an area controlled by the guerrilla army of the RUF, deep amid Sierra Leone’s ugly civil war.

The journey wasn’t the best cos the road was muddy, rutted, cratered, slow, but after a few-100-kms and a full day from Freetown, I got to Kono, one of a handful of towns where diamonds flow like beer after a good day of digging.

Well, no, not really, cos half of the town is Muslim.

And I was there during Ramadan—the holy month of fasting but I had met David, a Christian, and so in his company I drunk beer. (But discreetly indoors, as I didn’t want to be a dumb motherfucker and upset the pious outside.)

David is the son of a chief, a miner—or at least, has a lease to mine as he won’t be doing the digging himself, and HE was my guide, my security, while visiting the mines.

How to Visit a Diamond Mine in Sierra Leone

Without a local, and better a mine lord or a prestigious person, then you’re asking for trouble.

You may get robbed, or at the very least, hassled for money, as the miners are poor, rough, and wary. A good deal of townspeople are suspicious—like when Immigration officers came to my room.

I told them: I am not interested in diamonds, not a businessperson or a journalist—just a traveler.

And they saw that with passport in hand and dressed in a sarong, barefoot, t-shirt, straight-off the bed and into questioning, that I posed no threat.

Getting to the Diamond Mines

On motorbikes we zipped out of town—down a dusty, pot-holed road, past a Pakistani UN Peacekeeping Force memorial, past a captured rebel field howitzer stuck into an intersection – leading to a faded steel gateway saying: “Welcome’ or ‘Farewell’ to Kono.

Out beyond cut, upturned dirt fields of mud mounds and ponds about a mile from town where men scurried like ants, with shovels and sifting trays.

This was the standard diamond mining experience in Kono.

But it was regulated.

Those who had contacts or were chiefs, etc, had access to mining licenses and hired laborers to dig and sift the gems.

David was waiting until December to start: he needed an investor, more cash. But he introduced me to a “Chief” who controlled a large mining area alongside the river.

The Chief was friendly, confident/arrogant, red-casual suit—and once a small payment ($7) had been made, he escorted me around his turquoise mining ponds, ordering laborers to pose and smile for my camera.

He shouted this and that, thinking I was a journalist—although I told him I was not – and saying “We need this man, these people”; meaning publicity/foreign investment in his mining.

Afterwards he asked my nationality and was surprised that I was not American or British.

Reality of the Diamond Mines in Sierra Leone

I was told that to find diamonds, searching in certain soils, is the key.

And that even after exhaustive mining during the war, today secondary digging of the same area is still revealing more diamonds.

And if you were lucky, you could just scrape the ground and find one – no rock breaking or deep mining was necessary here.

But mostly, it’s long hours of digging craters and searching laboriously by hand.

He also informed me that diamonds came in many colors like coffee, green, orange and “double-decker” or double–colored, but that the typical white or clear diamonds are the most expensive.

During the war, he pointed out, across there stood the RUF—Revolutionary United Front—headquarters, destroyed now; where they controlled the diamonds fields, forcing 1000s to mine or die.

The RUF was a movement that had originated from real historical grievances but that had no “real” political agenda beyond greed, beyond diamond wealth control and the trade in guns and diamonds by neighboring warlord, Charles Taylor in Liberia.

Maybe you know the RUF were infamous for using child soldiers, who often cut off people’s arms, lips or ears… 50,000 victims.

Today, cripples are there on the streets for display, and for a few pennies of your pity.

But that was then, and this is now.

5 years on: Diamonds mining is apparently fairer, shared, regulated by international law and money going to the government.

This mine falls under the international laws, while others may not.

David told me that of his total diamond profits 5% will go to the government in tax, and he keeps the rest, beyond his overheads of mining license and workers’ wages, etc.

Today, there are no ‘blood diamonds’ in Sierra Leone

That lovely diamond you buy could’ve been mined by men working 8–9-10+ hours-per-day.

Another cruel global reality … but this pitiful sum can keep many families alive.