Sharp questioning. Disbelief. Officials are puzzled by my arrival in Chebayish.

Why are you here?

Eventually, I was allowed to stay overnight.

But the only place in town was a large scruffy dormitory full of single men. Guys came and went at all hours and then woke early with the dawn call to prayer.

For over 2000 years, an ancient – even biblical  – way of life has thrived in southern Iraq.

Amid islands and wetlands fed by the mighty Tigris and Euphrates rivers, today’s inhabitants – the “Marsh Arabs”, continue an ancient lifestyle dependent on the waters of these biblical rivers.

(This is the land of Babylon and ancient Mesopotamia, where the ziggurat of Abraham’s Ur and other stepped, mud-brick pyramids still stand today).

Away from surrounding desert, a world carpeted by greenery, flowing with fish and fresh water. Flocks of migratory birds nesting. Horizons of date palms and marsh reeds. Elements for life like canoes, housing and animal feed provided by the marsh vegetation.

For centuries, it had been a simple way of life, sustained by the waters, and largely forgotten by time.

Yet recently, this marshland and culture were nearly-destroyed by Saddam Hussein.

Following the unsuccessful Shia rebellion against Saddam’s rule (after the first Gulf War in 1991), the Iraqi dictator began systematically draining the marshes to punish the Marsh Arabs.

But I believe in recent years, this has been reversed and the marshes are recovering again.

The afternoon saw an invitation to drink – Arabic-style sweet black – tea with men in robes and head-dress, seated on carpets around the edge of a small hall made entirely of reeds in the traditional arched roof style.

Later around dusk, walking along the waterfront, we get bewildered looks. Some smiles; but some young kids threw stones.

The plan the following day had been to walk many kilometers along the dirt embankment road that cuts across the vast marshlands. But soldiers wouldn’t allow this.

And there were plenty of them to deter this adventure. Checkpoints every 5 km or so along the only road out of town.

The marshes had been a refuge for army deserters during the Iran-Iraq War (which had finished 6 months earlier).

That next morning walking past an army truck, and in the back two soldiers guarded 4 men in ragged uniforms. Deserters ???

All of them stared at this stranger. I waved. Smiled, yelled. “Hi guys! How are ya?” At that passing moment, all six faces lit up in warm unison.

Some time into the shared taxi ride from Chebayish, I got the driver to let me out. Well away from army checkpoints I wandered along the quiet embankment road.

And took these photos of locals working amid the marshes. 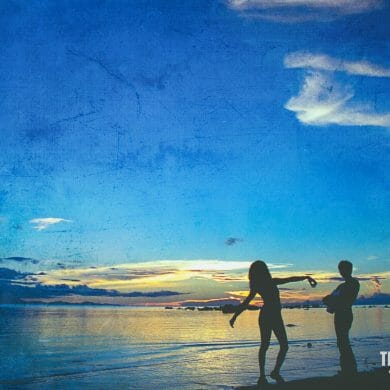