An ancient, giant stone face half-buried is something that I wanted to see …

The mysterious, ancient site of El Baul is located on the Pacific coast among vast sugarcane plantations – 5 km from the sweltering hot town of Santa Lucia.

But finding it wasn’t easy.

From the Refinery Headquarters and its small museum of various stones sculptures collected over the centuries I set out on foot to then get lift in an old-US school bus taking workers back to town.

They dropped me at a path leading into a jungle of 3 meter-high sugarcane, and I proceeded to wander the dirt track.

Then a lightning storm came crashing down as I wandered amid the green mass.

My poncho saved me from a soaking but I was already wet from sweat. And it cooled me off.

After 30 minutes I was about to give up on finding the unmarked site when a lone worker – with machete and bag – encountered me and in simple Spanish I got him to lead me to the distant, high grassy mound that is in fact an unexplored temple platform where stands the great half-buried head and site of a very ancient place of worship.

The site is that of the little-known civilization of the (non-Mayan) Pipil and the city of Cotzumalguapa, which flourished from 650 – 950 AD.

Of the various sites around Santa Lucia, El Baul – Santa Lucia Cotzumalguapa – was the largest and probably where the palaces of the kings were located.

The city’s wealth was based upon the production of cacao, the seeds were traded across Mesoamerica for use in ritual drinks.

Today, El Baul is an active pagan site in which Pipil descendants and also Maya go to light candles, fire and copal – pine-incense, to also pray, give offerings of liquor, and even sacrifice chickens.

The cane worker was very friendly, especially after my tip, and happily – but sternly – posed for a photo.

His expression not too dissimilar to the ancient stone face of this surreal ancestor.

Afterwards, he continued onto his village; and I wandered the 5 km back to town, indigenous families outside there houses staring at the lone gringo wandering amid their forgotten corner of Guatemala.

All smiles and returned greetings as I offered maybe 100 “Buenas Tardes” – Good Afternoon(s) to all I encountered on route. 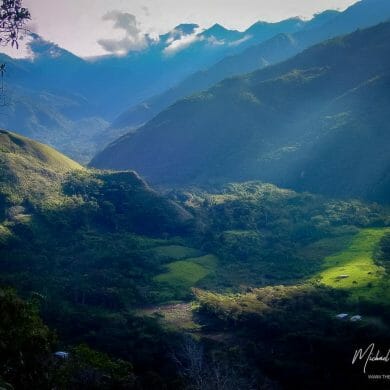 Trekking to the Lost Inca City of Vilcabamba – Peru
My site uses cookies.