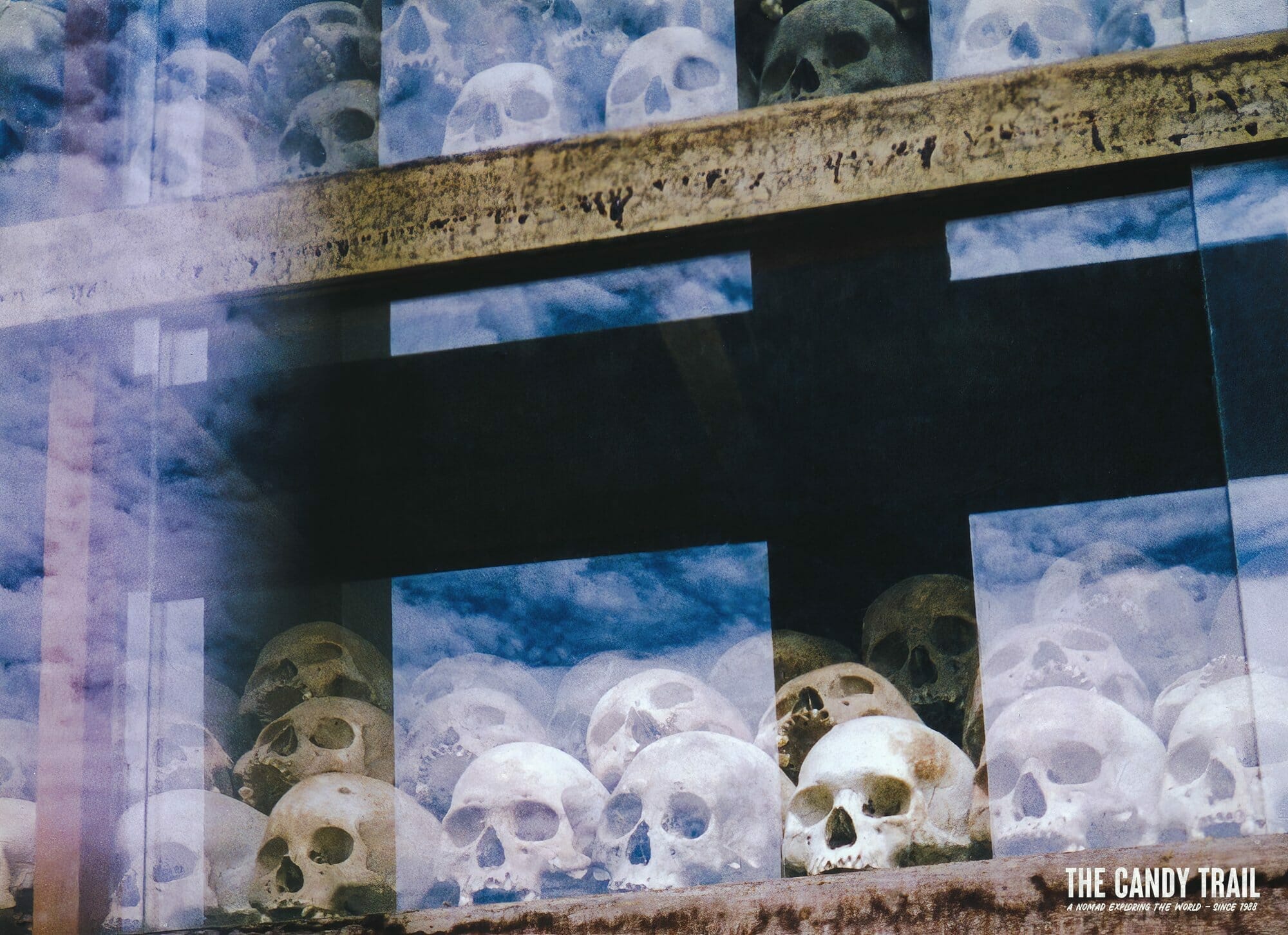 The Killing of a Country – Cambodia

June 1994: Tonight, as I rest on my bed and write this, I feel uneasy, queasy. You see, I’ve several reasons for feeling sick.

Earlier I’d bought a hard-boiled egg from a street vendor.

I sat on a stool beside her bucket as she cracked the shell, handing me the spoon to scoop out a well-cooked yoke.

Firm white and yellow. But it contained the tiny black body of a nearly born bird!

Fuck! I thought. I can’t eat this! I ain’t eating this!

I paid the woman, excusing myself after the first teaspoon of hard-rubber. She smiled. So did I.

My first taste of Cambodian street food—a national delicacy—has killed my desire to eat another egg (for many months).

Earlier in the afternoon, I’d ridden with a taxi-motorbike along a rural road to fields of green grass surrounding dozens of dirt pits—littered with rotting rag and bone poking from the earth; cows grazing as a breeze swept the spindly palms across a cloudy day, yet here, the sun still shone amid the chilly vibes of violent death.

GRAVE No. 5: Mass grave of more than 100 victims. Children and women whose majority were naked.

I wandered these Killing Fields with a Cambodian in his forties (my motor-taxi driver had survived the onslaught; his family hadn’t).

He pointed to clumps of flax bushes—their large branches of hard serrations. These were used by the Khmer Rouge to hack heads off living people.

A few weeks ago, I’d read in the Bangkok Post that Khmer Rouge guerrillas had hacked the heads off Cambodian Army officers with a blunt, rusty saw.

(NOTE: At the time of these travels in 1994, the civil war was ongoing and the Khmer Rouge leader, Brother #1 – Pol Pot, was still alive in a KR mountain base in north-east Cambodia.)

At the pagoda serving as a memorial to the dead, peering through the glass-side walls, busted skulls and bones, human bits stacked from ceiling to floor.

“… 86 of the 129 mass graves were unearthed in this extermination camp and 8985 corpse were found. All the victims (peasants, workers, intellectuals, ministers, diplomats, foreigners, women, children) detained and tortured during interrogation at Tuol Sleng (S-21) were later sent to Choueng Ek (where I stand, now peaceful farmland) for liquidation. We are absolutely determined not to let this genocidal regime to reoccur in Kampuchea.”

Again, the heave and splatter.

For a third time, he power vomits, blowing his nose, raking his throat and gobbing.

And then there’s the notorious S-21

A school that became a prison camp. In one interrogation room nothing, except a steel bed-frame.

On the wall, a large black and white photograph of that steel bed with a mutilated body; the floor wet with blood as the victim laid hacked by rakes, hammers and hoes.

It was said, KR guards laughed as their victims screamed as skin was torn, shredded and ripped by steel.

THE SECURITY REGULATIONS (posted on the walls of S-21)

The night is noisy and humid as I draw on a joint and reflect.

I hear the victims, their fear and suffering in my head.

This $2-a-night room is a windowless cell.

Only a bed and a fan—with only one speed. It rattles fast, whirling and mocking me—chop-chop-chop. (Like them, I could lose my head.)

I try to shut it out. Imagining singing angels, but the southern gospel becomes an air-raid siren and then loud, sadistic laughter.

Everything in my room, in my mind, is tortured.

I am sick from the killing of a country.