The rock-hewn churches of Lalibela remain one the world’s least-recognized man-made wonders. Yet in Medieval times they were known as “The Jerusalem of Ethiopia”.

My pilgrimage to Lalibela began from the small town of Weldiya.

Beginning at 5 am, with a ride in a truck across a darkened landscape before the sun revealed rocky slopes patched by stone and thatch huts and fields of dry crops.

Up a winding gravel road, we snaked to a high pass, where the cold dawn scenery was eclipsed by the sun creeping across the far side. The truck rattling down the rutted, dirt track, avoiding fallen boulders and stray goats, narrowly missing laden, disobedient donkeys – tapped aside by the farmer’s stick.

Under the deep-blue sky, amid parched ridges and ravines, our lone truck droned across this steep barren silence, which had widened into a gaping desert canyon – like an Ethiopian Death Valley.

I got out in an isolated village; the truck I’d ridden with had detoured, and there I waited (for another ride. But nothing moved beyond mules and tribespeople – and even they were few.)

Seeing me hanging around, a woman invited me into her earth-plastered-between-the-sticks shack, to drink tea.

Soon a small crowd gathered, part of which later followed me around the village, visiting the U.N. grain warehouse – a tin-sheet barn – and where I met the proud male guardian of the padlock.

He showed me the key … and at the market, where women shaded beneath branch-and-sacking shelters, you could buy veggies or bundles of living chickens tied at the feet.

The smiley kids who’d followed me around, the kids with fly-infested lips, happily posed for a photo.

It was a lucky lift.

I rode the last 45 – dusty – kilometers to Lalibela in an aid truck driven by Mohammad.

The only other vehicles came from the opposite direction, and they too were aid trucks (in the service of Oxfam and Save the Children). Mohammad knew both the drivers and we stopped for a brief chat. I thought it ironic, me once being an Oxfam member, that they now helped me.

Perched on a mountainside is Lalibela.

The eleven 13th century churches are carved deep and cavernous into the living rock, (some stand monolithic within large complexes chiseled-out from the hillsides).

The largest structure at Lalibela is Medhane Alem or “The Redeemer of the World”.

It stands 11 meters high and is 23 meters wide by 33 meters long and resembles the Parthenon. But rather than freestanding stone, this structure has been cut from the surrounding red rock. (You look down at the complex; only its roof is at ground level.)

All eleven churches at Lalibela are different in design and decoration.

Some are carved with Byzantine and Persian influenced motifs. Many have arched windows, others rich interiors of biblical murals.

Ethiopia has been (orthodox or eastern) Christian since 333 AD. However, they use a different calendar to that in the West and tourist posters proclaim “13 Months of Sunshine”. In Ethiopia, Christmas falls on 7th January.

And it is then that Lalibela swells with the influx of 20,000-plus pilgrims.

But in Ethiopia on the 25th December – my Christmas, as it chanced, this year the date fell on a Sunday.

So on Xmas Day, I got up early and walked around the village, from one church service to the next until I stopped at Saint George.

Now, near the edge of the deep rock-hewn drop, gathered above the cross-shaped church, villagers in white shawls listen to a black-robed priest reading aloud from a bible.

The priest is shaded by a ceremonial umbrella (of crimson and green paisley panels) held by a boy. For already it is hot, and Ethiopian services extend for hours.

Some of the praying villagers watch me as I watch them; a little way off, I’m seated on the roots of an ancient tree.

Into the distance, I gaze at the desert canyons and mountains drawing color from the morning sun.

Screaming from the bowels of the earth. There’s an exorcism happening in the dark chambers of the church. It lasts 15 minutes: her shrieking is torturous.

Two young children have left the praying mass and joined me.

They ask for money. I say “No” a dozen times. They persist. (Pity, cos I want some peace to reflect on those back home.)

Still, they pester me, and so I wander away to smoke a number, then return to my tree. Still, the priest reads and all listen in silence.

This scene is timeless. The church, the clergy, the clothes of the people.

I smile but don’t want to disturb.

But it can’t be helped. These kids – especially the cheeky little girl – keep asking for “Something!” I’m a little weary of their demands.

I’ve tried ignoring them, but now decide to play. “Something,” I reply, “okay” – and I hand him a stone and her a twig – “Here’s something.”

Their shrieks and laughter tears across the quiet surrounds. Some worshipers smile; others frown.

But in the end, it’s me who gets something.

Chunks of brown bread are passed around the mass.

A lad walks up to me with the basket extended. I’m part of their Sunday, and they’re part of my Christmas.

The service finishes with blessings – the priest’s wooden cross placed against foreheads, cheeks and then the lips of those that wait.

It takes a while for mothers and their babies, old ladies and men to get their dose.

And me, I stare at the elaborately-carved living-rock standing symbolically of this world … and I feel I’ve been there, back some centuries.

Back with the hymns of the soft-spoken priest, away with the crowing of ravens, drifting back in time with the wind amid the murmuring of prayer. 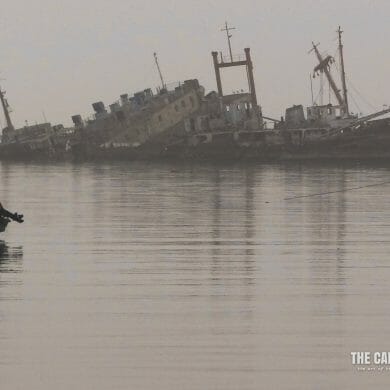 Berbera – Ancient Port at the End of the World – Somaliland
My site uses cookies.