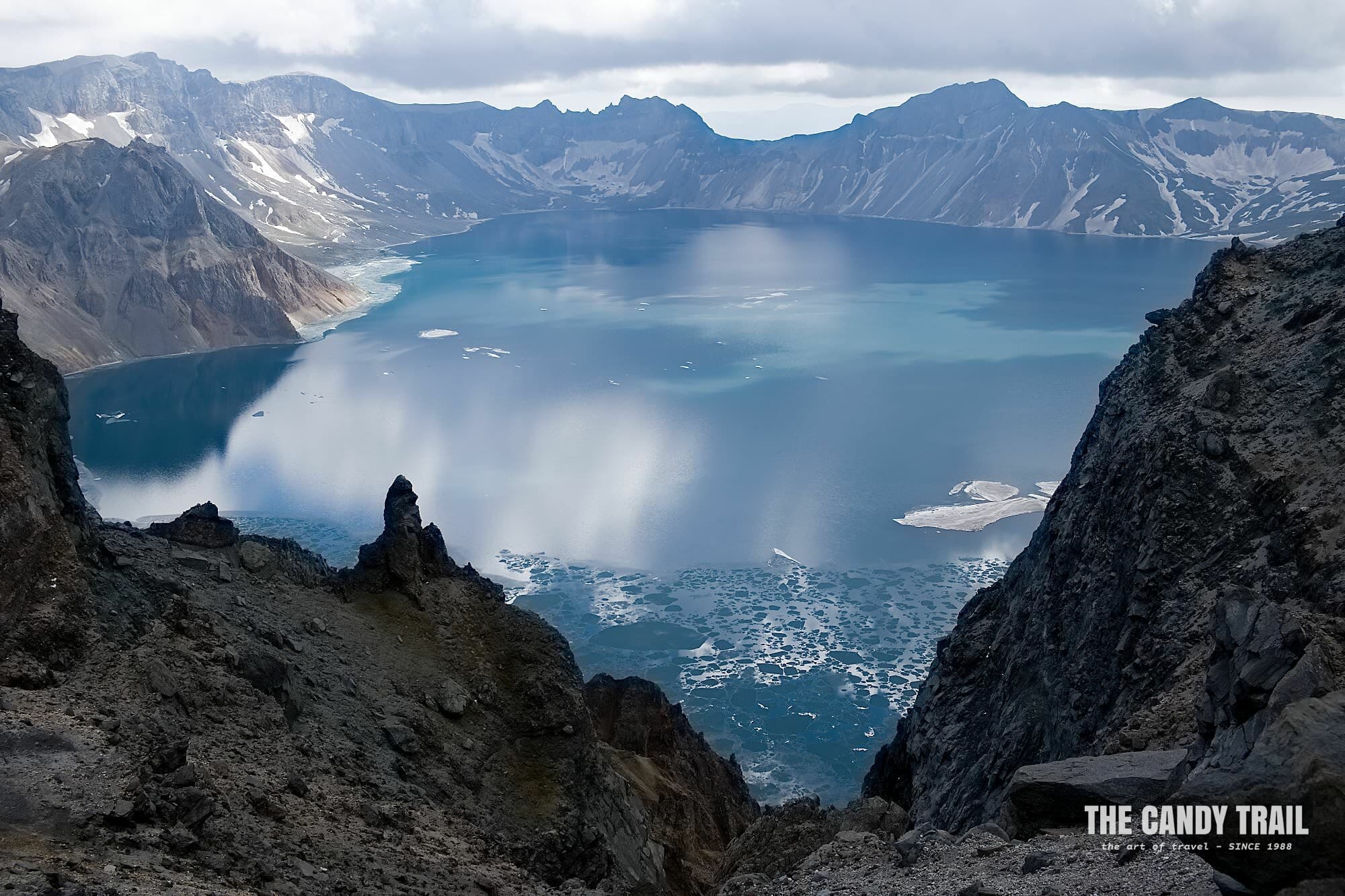 Changbai Mountain and Heaven Lake are full of surprises – in Spring.

Changbaishan (“shan” is ‘Mountain’ in Chinese) is a major tourist attraction in North-Eastern China. However, it’s also a big deal in neighboring North Korea, where it’s called Mount Paektu.

North Korean myth says the founder Kim Jong-il was born near Mount Paektu, and in fact, the mountain is sacred to both North and South Korea as it’s regarded as the spiritual home of Koreans.

At Changbai, busloads of South Koreans visit from the Chinese side.

On this day, a group of South Korean teenagers burst into emotive tune, some teary-eyed, which I assume is their national anthem, as Mount Paektu is mentioned in both Koreas national song.

Heaven Lake swims in a volcanic crater, formed back in 946 AD when Paektu Mountain erupted.

At its deepest point, the Heaven Lake reaches 384 meters and is frozen or icy from October to June.

NOTE: Visiting Changbai is not a DIY hike-anywhere experience as the mountain and Heaven Lake border China and North Korea.

There are 3 sides from to visit Changbai from China.

The West and North have the most spectacular vistas, with the western side being most visited. (However, the reality is the area is very developed; so expect crowds).

And due to the sensitive border and overwhelming tourist numbers, you must take an organized trip to visit Changbaishan and Heaven Lake (even if hiking it, you must still pay entrance + transportation fees).

Wei and I visited the Northern viewpoint in Spring, from which these photos are taken. And we encountered mild crowds (many there for only a short time).

Weather at Changbai Mountain is unpredictable.

When to visit: It’s luck of the draw whether you see anything.

According to a staff member on the summit, the lake is visible only 100 days of the year!

He also told Wei that we were lucky to see all seasons in one day. Especially since rain brings zero visibility.

While Winter can mean blue skies and less cloud and more chances of seeing the lake, this also means freezing mountain temperatures.

Summer brings rain – visibility issues – and flowers (at the Western viewpoint). But also, Summer school holiday crowds – up to 20,000 people each day; tickets are limited !!!

Autumn maybe the best time to visit Changbai, with less rain and red leaves around the surrounding forest park

Getting there: To the North Side (Bei Po): Firstly, you need to get from the tourist hub of Erdao Baihe to enter Changbai National Park (we did it by van but buses do the 53 km route). Once there, frequent shuttle buses take 40 minutes to reach a station at the foot of the mountain, where lines of minivans await you. Then it’s a fast, 15 minute drive up the mountain slopes to the Heaven Lake vistas.

Once at the summit minivan terminal, it’s a short walk up paved steps – 5 to 10 minutes – to the lake view walkway. And while the walking route is very limited, the views are A-MA-ZING !!!

This equals 105 RMB for the park entrance (good for 3 days as bad weather means no views and an option to return) and 2 return transportation tickets (another 165 RMB for the bus + minivan; these fees include traveling to the other sites).

The mountain entrance ticket also includes access to a nearby waterfall, hot springs and an underground forest – all within the Changbaishan Nature Reserve. NOTE: The trail to the smaller Heaven Lake (above the waterfall) is now permanently closed.

Changbai Mountain stands over 2000 meters – so there’s freezing winds and chill by the sky-load. However, it can get hot when calm, yet it’s usually chilly or freezing much of the time.

And take a daypack with snacks and water -I took a bottle of baijiu and munchies 🙂 to enhance the hours. But yes, there are the usual conveniences at the summit: restaurant, shops, shelter and toilets.

A group lunch with others on the road, staying in Erdao Baihe, while visiting Changbaishan.