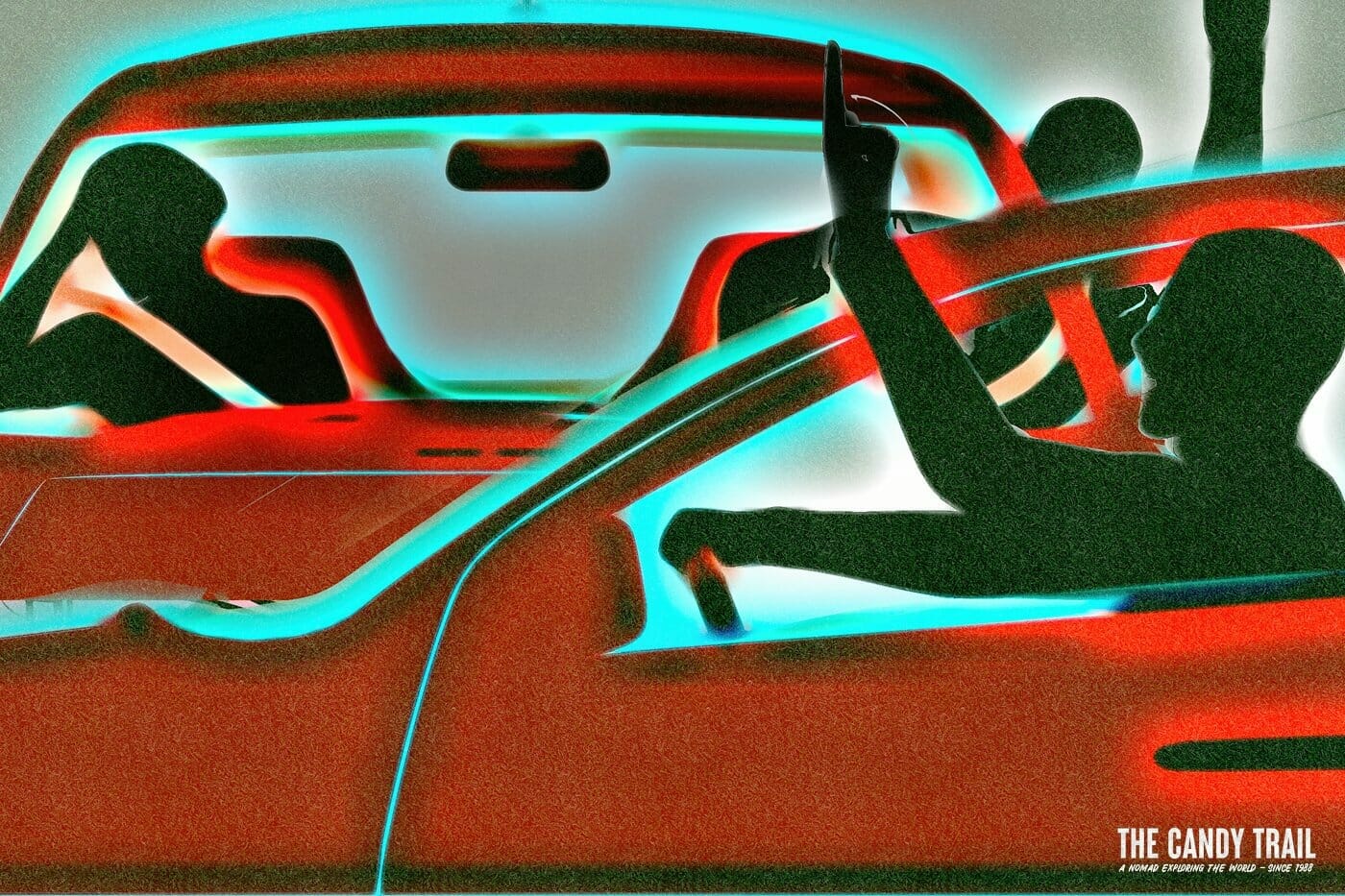 Having been in a major bus accident on route to Tehran—in which an Iranian I’d befriended was killed; now, the prospect of another disaster loomed ahead.

He drove like a maniac – rushing home to rescue the oven fries he’d left baking by mistake, cutting lanes to get back before his house caught fire.

And if this was the case, he’d no worries about pulling the fries out golden and crisp and not a minute overcooked.

But being in Iran, I guess this wasn’t the reason he drove the way he did.

And I assumed french fries, hamburgers and Coke were no-no’s in Islamic Iran, believing Americana made the locals sick.

Usually the negative news – and it was this what stuck in my head: a closed society ruled by religion and hostile to the West, obsessed with martyrdom and wrecked by war. A land of crazies.

I felt this might be the case as the taxi driver grinned at me in his rearview mirror and said, “Where you want?” Where do I want to go?

I realized – too late – that I’d taken the wrong taxi.

The driver didn’t have a clue where I wanted to go.

And he drove recklessly – not that I minded; I enjoyed the speed. We cut lanes blindly, honking our way into gaps and tooting at anyone who did this to us.

Every second car around us was a Hillman Hunter with dented door panels or scratched and patched paintwork.

This taxi was also a Hillman “Chariot” (as the Iranian versions are called).

But it had no fancy extras -in fact, many were missing bits. Vital bits like bumpers. At least this rattling wreck had a rear-view mirror – apparently unnecessary, as my driver used it only to maintain eye contact with me, and something from which to hang Koranic script and beads.

“Where you want mister?” “The Foreign Ministry!” He grinned in the mirror and said nothing. “Visa, you know?” I waved my passport in the air, stamping it with my fist.

From the taxi window, came my first impressions of Tehran

A dusty-brown-concrete-block city, with LA-style freeways clogged by cars. The motor-flow looped Tehran like mechanical spaghetti, strangling it like frayed rope as the city choked on smog.

Having arrived in late summer, I could barely see the Elburz Mountains; they were hazy and lost, like my driver.

He pulled over and asked directions from a pedestrian for a second time, then we charged back into the traffic.

Iranian drivers displayed skills only seen in the West at demolition derbies.

I wondered: Is there a road code here?

Vehicles ran the gauntlet at intersections.

Traffic lights didn’t work, nor were policemen present. Survival meant speed up and swerve. And honk!

And continue honking. At one stage, my driver got abused by a cyclist – who’d averted a crunching by fending off our taxi with a hand-barge to the roof.

At another intersection, three cars circled a fallen cyclist, drivers holding up the flow as they bickered over the blame.

Potential accidents occurred every minute, often three within as many seconds. Scenes so chaotic that it is unimaginable to New Zealanders accustomed to orderly roads.

Motorists in Tehran practiced a road code that I’d seen in other developing nations, like some unwritten but respected motor hierarchy.

The King of the Road was the truck – everything else gave way. Buses threatened cars and big cars fought smaller cars, while scooters – the greatest menace to the pedestrian – rode on both sides of the road irrespective of direction; others weaved along footpaths.

Later, as a pedestrian in Tehran, I was shown how to cross busy streets.

After waiting for a break in the traffic – which never came, an old man grabbed my hand and led me. We dashed amongst the traffic, stopping mid-way as cars whizzed past, then hoping approaching cars would slow, we sprinted across before the gap closed.

After half-an-hour we’d found the Foreign Ministry. The driver left in a hurry as I strolled to the entrance. But a soldier greeted my cheerful “Hello” with an expressionless “No, closed.”

After some minutes of asking passers-by I found an English speaker. He said it was a public holiday. And what’s more, I was at the wrong building – this was NOT the Foreign Ministry.

I was lost in north Tehran – at least 5 cm off my out-of-date map.

At a bus stop, I couldn’t read the Farsi destinations on the front of each bus.

And it was only thanks to an elderly man’s help that I made my way by bus from north to central Tehran.

I’d decided to get to Tubkani Square.

It’d been a struggle to board the crowded, battered suburban bus. And when this bus had arrived, people rushed it like sharks to bleeding sailors.

The old man grabbed my arm, and we plowed into a scrum of males squeezing through the rear door – three at once. The front door was for women and they segregated the bus into two. Women in black chadors (head to ankle robes) in the front half, and in the back, crammed the men.

As the bus drove down the tree-lined boulevard towards the concrete smear of central Tehran, the old man hardly spoke, just smiled. He told me when it was my stop. I thanked him, said goodbye and disembarked from the crush and onto the hot dusty streets.

I remember the old man’s words as we’d waited for the bus.

He’d said, “I am happy to be able to help you,” and insisted on paying for my ticket. “I do not see many foreigners in Tehran. Before the Revolution, many came here, but since then I have seen only three Europeans. I hope your coming to Tehran is a sign that more Westerners will return…”